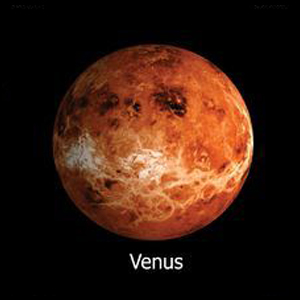 The second planet from the Sun and our closest planetary neighbor, Venus is similar in structure and size to Earth, but it is now a very different world.

Venus spins slowly in the opposite direction most planets do. Its thick atmosphere traps heat in a runaway greenhouse effect, making it the hottest planet in our solar system—with surface temperatures hot enough to melt lead. Glimpses below the clouds reveal volcanoes and deformed mountains.

You have now traveled a distance of about 67 million miles (108 million km) or .8AU.  One day on Venus lasts 243 Earth days because Venus spins backward, with its sun rising in the west and set in the east. Venus has a diverse terrain consisting of a solid surface that is a volcanic landscape covered with extensive plains featuring high volcanic mountains and vast ridged plateaus. Venus has no moons and no rings.

The planet’s surface temperature is about 900 degrees Fahrenheit (465 degrees Celsius). While the surface rotates slowly, the winds blow at hurricane force, sending clouds completely around the planet every five days.

Figure this: Multiply your weight by .91 to see what you weigh on Earth.

Off again-everyone should know this planet.