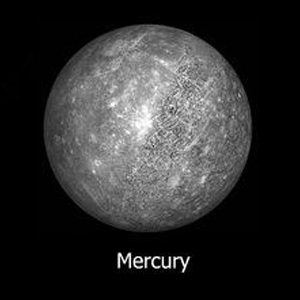 You are right, it is Mercury. You have just traveled a distance of about 36 million miles (58 million kilometers) or 0.39 AU. The smallest planet in our solar system and the nearest to the Sun, Mercury is only slightly larger than Earth’s Moon. From the surface of Mercury, the Sun would appear more than three times as large as it does when viewed from Earth, and the sunlight would be as much as seven times brighter.

Mercury is the smallest planet in our solar system—only slightly larger than Earth’s Moon.

One day on Mercury (the time it takes for Mercury to rotate or spin once with respect to the stars) takes 59 Earth days. One day-night cycle on Mercury takes 175.97 Earth days. Mercury makes a complete orbit around the Sun (a year in Mercury time) in just 88 Earth days.

Mercury is a rocky planet, also known as a terrestrial planet. Mercury has a solid, cratered surface, much like the Earth’s moon. Mercury’s thin atmosphere, or exosphere, is composed mostly of oxygen (O2), sodium (Na), hydrogen (H2), helium (He), and potassium (K). Atoms that are blasted off the surface by the solar wind and micrometeoroid impacts create Mercury’s exosphere. There are no moons or rings around Mercury.

Figure this: Multiply your weight by .38 to find out what you would weigh on Mercury.

Now we move on to the next planet, do you know which one it is?